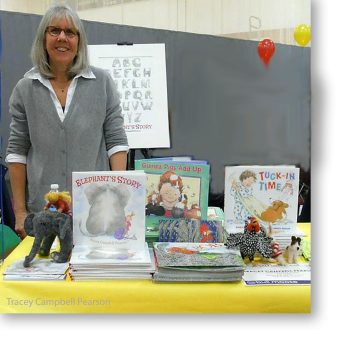 Tracey Campbell Pearson graduated from Parsons in NYC. She studied picture book illustration with Maurice Sendak and designer Jane Byers Bierhorst. Her first book, We Wish You a Merry Christmas was published by Dial Books -1983, Booklist starred review. Pearson is the author and illustrator of many critically acclaimed picture books, including Bob, a NCTE Notable Book, Where Does Joe Go?, an Oppenheim Gold Award and Myrtle, a Parent’s Choice Award. Elephant’s Story was featured on ABC Best Books for Children Catalog Cover. She is the illustrator of many more children’s books, including The Moon by Robert Louis Stevenson a Booklist Editor’s Choice, Top of the List and a School Library Journal Book of the year. Pearson lives in Vermont with her husband and Wilbur, her 98lb studio pup. Their two grown children live in Chicago and NYC….but sometimes they come back to Vermont for a visit and a walk in the woods.