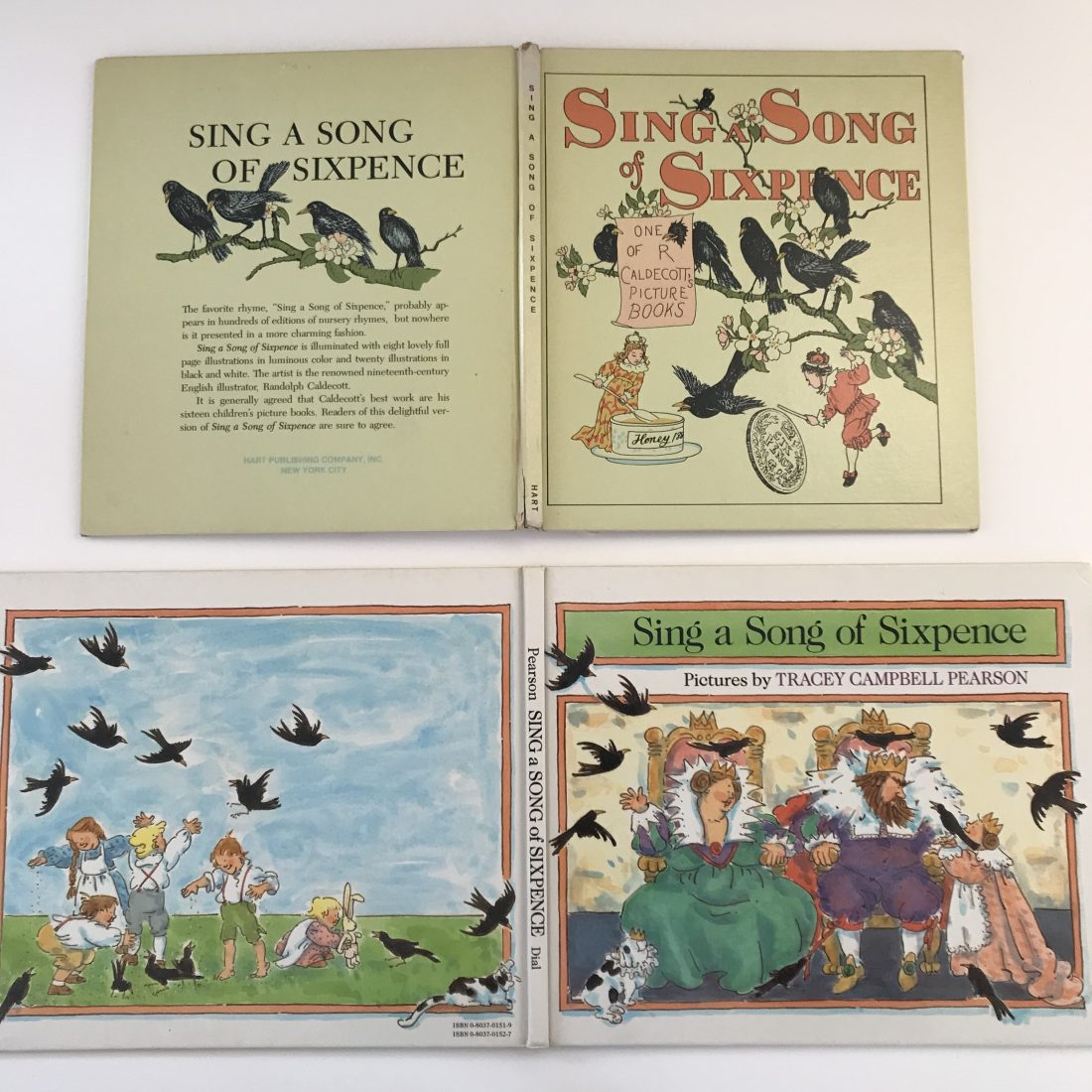 Maurice Sendak introduced me to his work in 1976. He called him the “Father of Picture Books”

My version of Sing a Song of Sixpence was published by Dial Books for Young Readers in 1985. 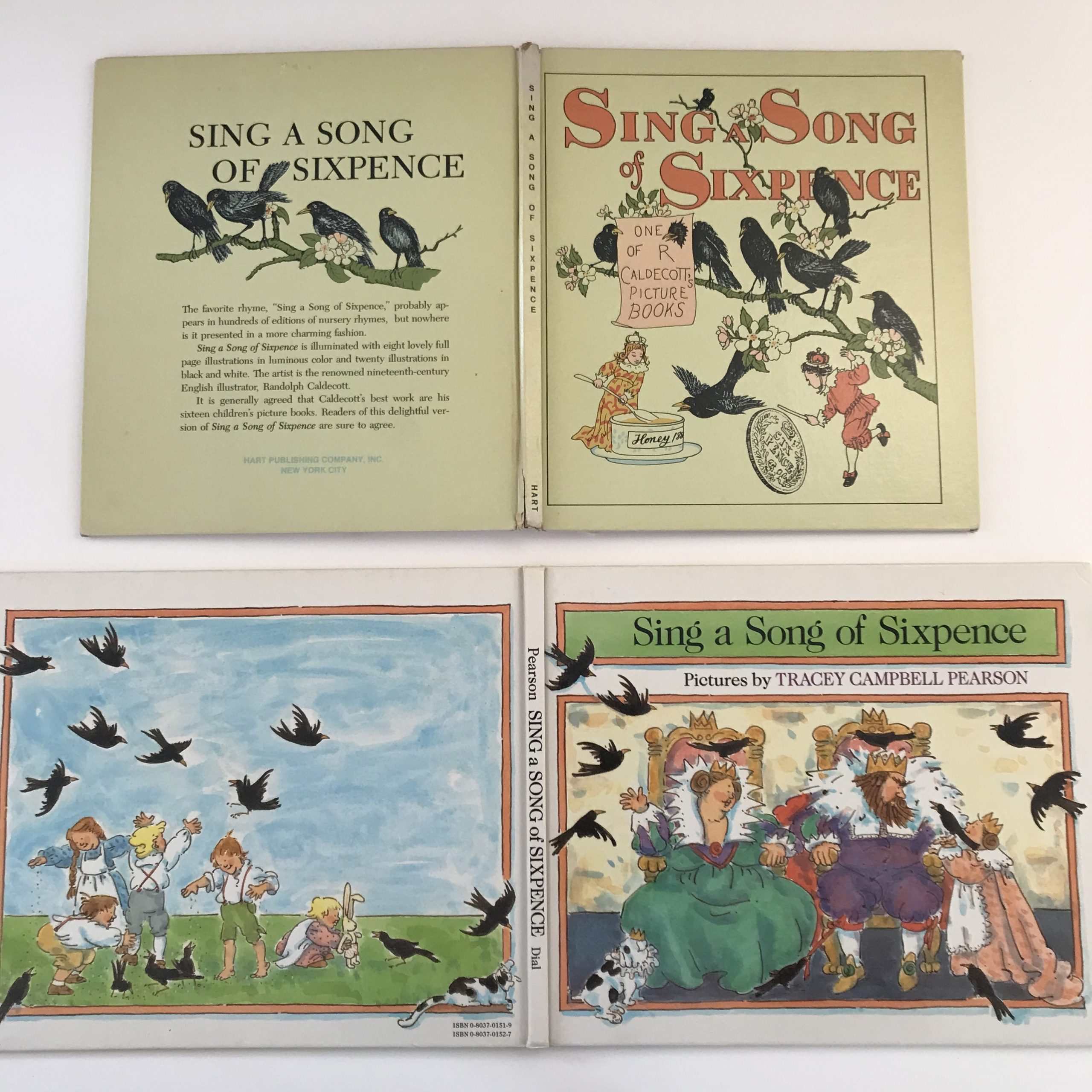 I studied with Sendak while I was a student at Parson’s in NYC.  It took me a few picture books before I was brave enough to try my hand at illustrating this nursery rhyme used by Caldecott and also admired by Sendak. The challenge:  Be true to the words while creating a different story and a different picture book. 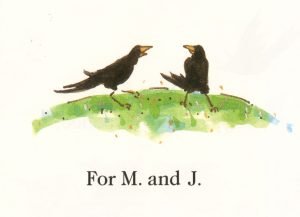 Here are a few pages from both books: 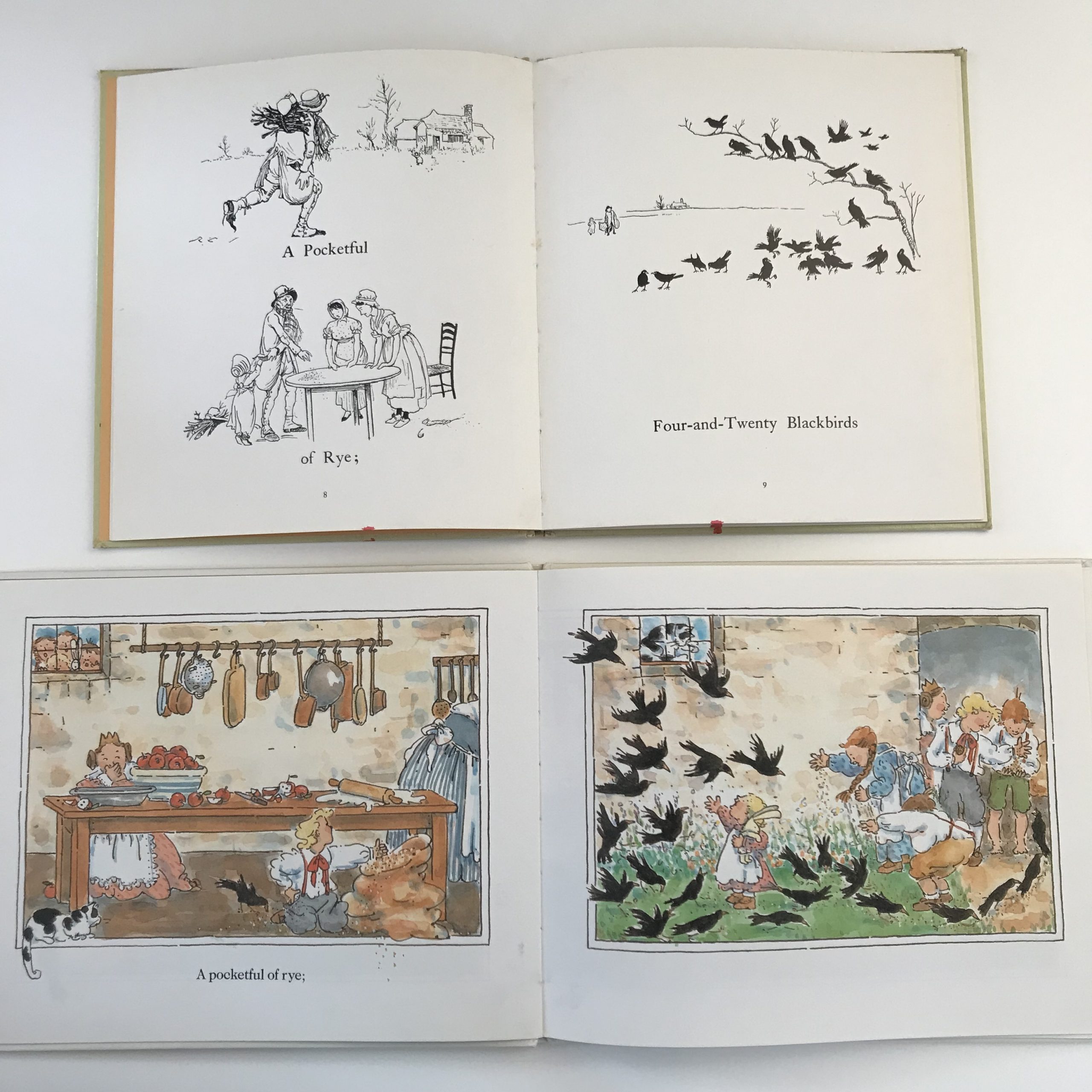 In my version, we have the courtyard kids. Their parents work for the king and queen. The child with the blonde hair and clean white shirt, is new to the neighborhood. They bet him a sixpence that he can’t snitch a pocket full of rye.

We now have 24 blackbirds.

The princess watches it all unfold. She really wants to play with the courtyard kids. 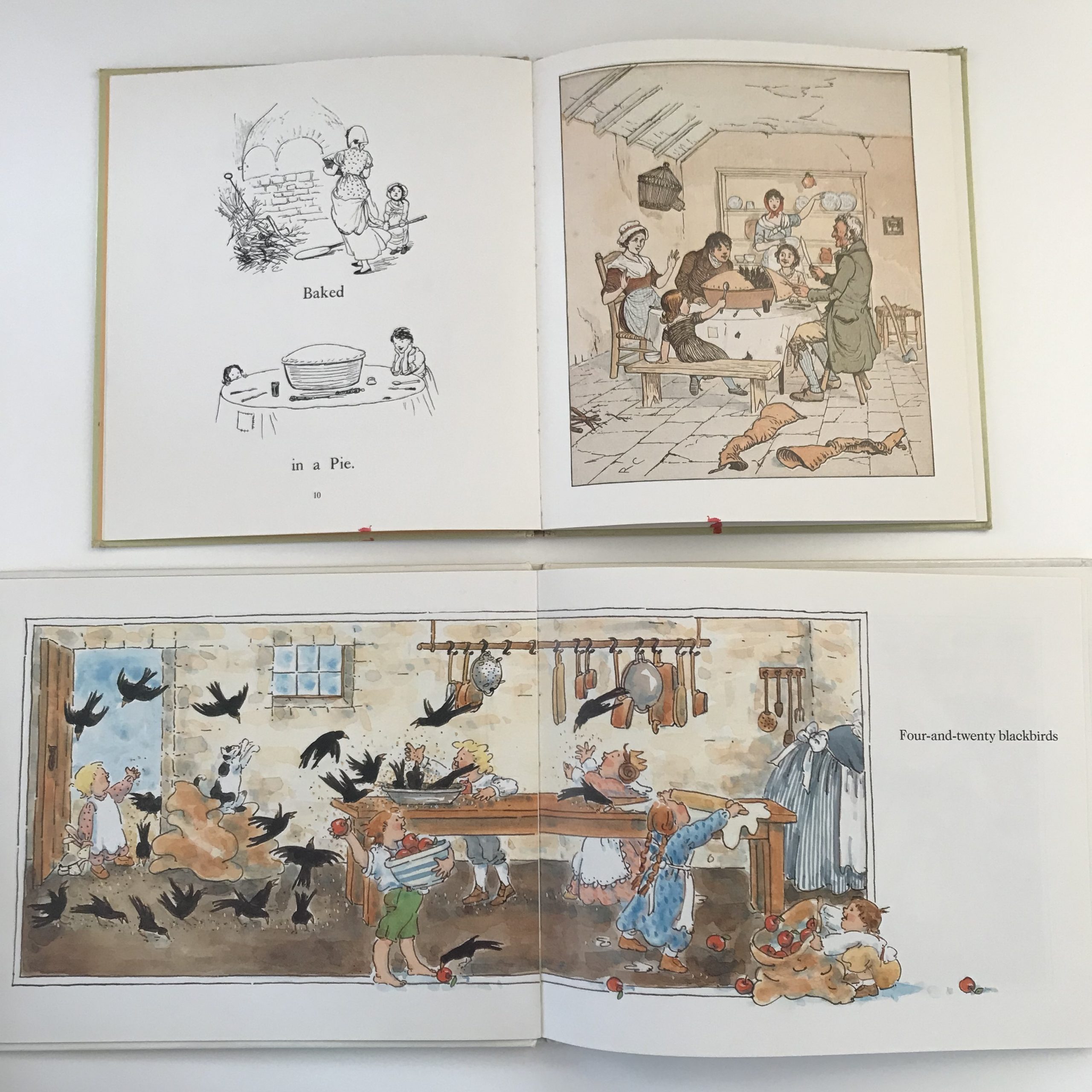 And she does. The children sprinkle rye while the cook has her back turned. They put the apples back in the bag.

Now, instead of apple pie, we have blackbird pie. The reader knows what’s happening. The cook is clueless. 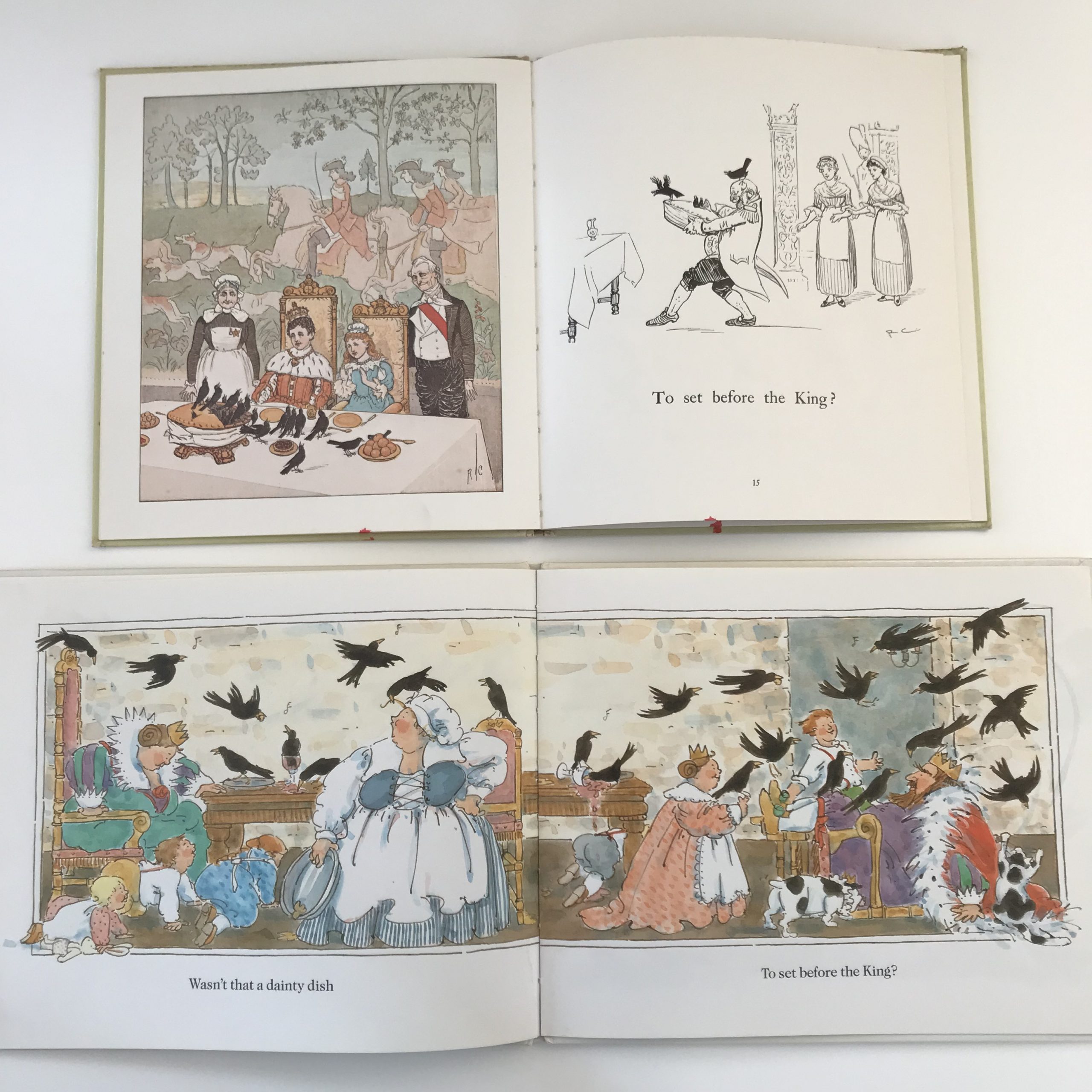 “Wasn’t that a dainty dish to set before the king?”

The kids and the princess think it’s all great fun. The King, Queen and the cook aren’t so sure. 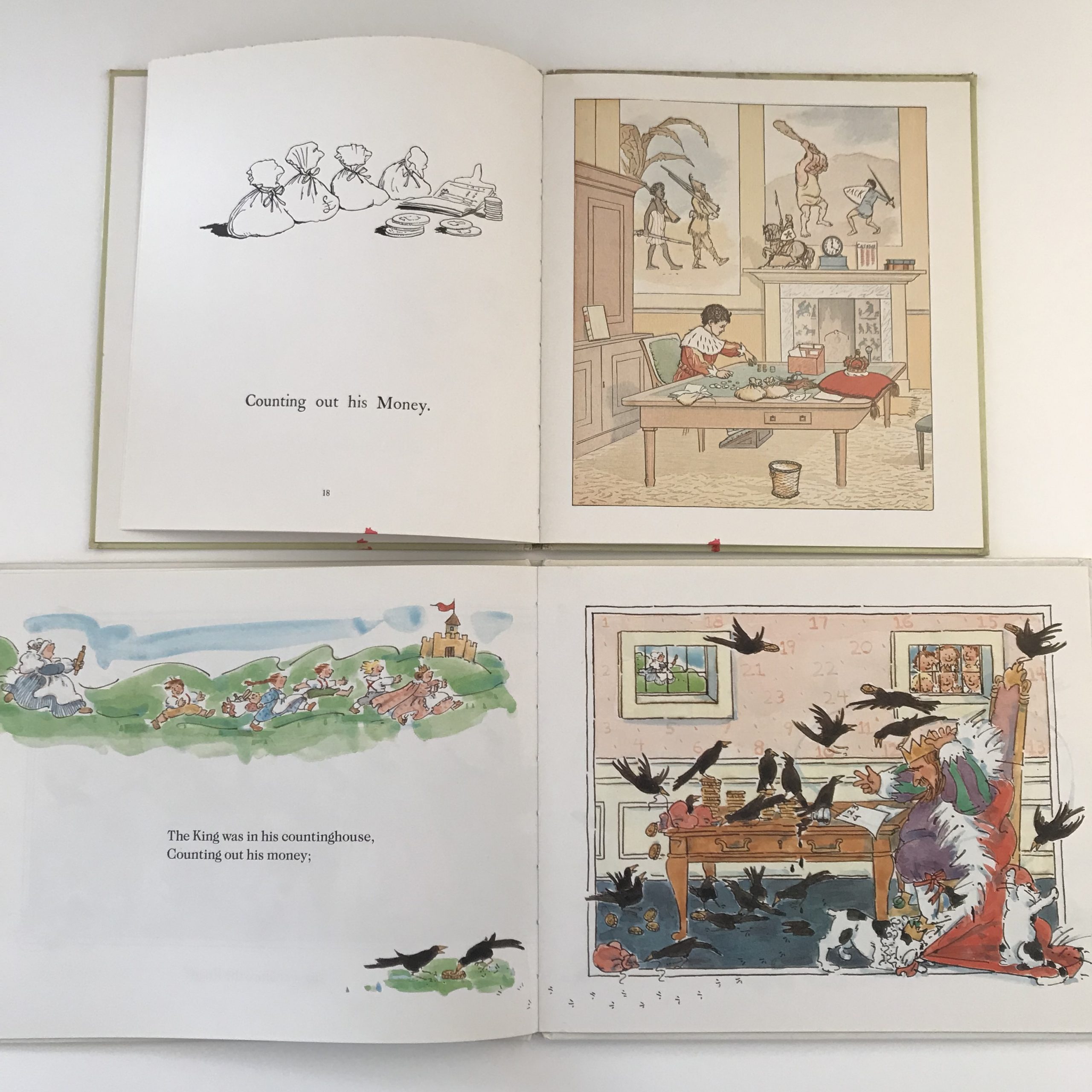 The cook chases the children. The blackbirds join the King in the counting house. 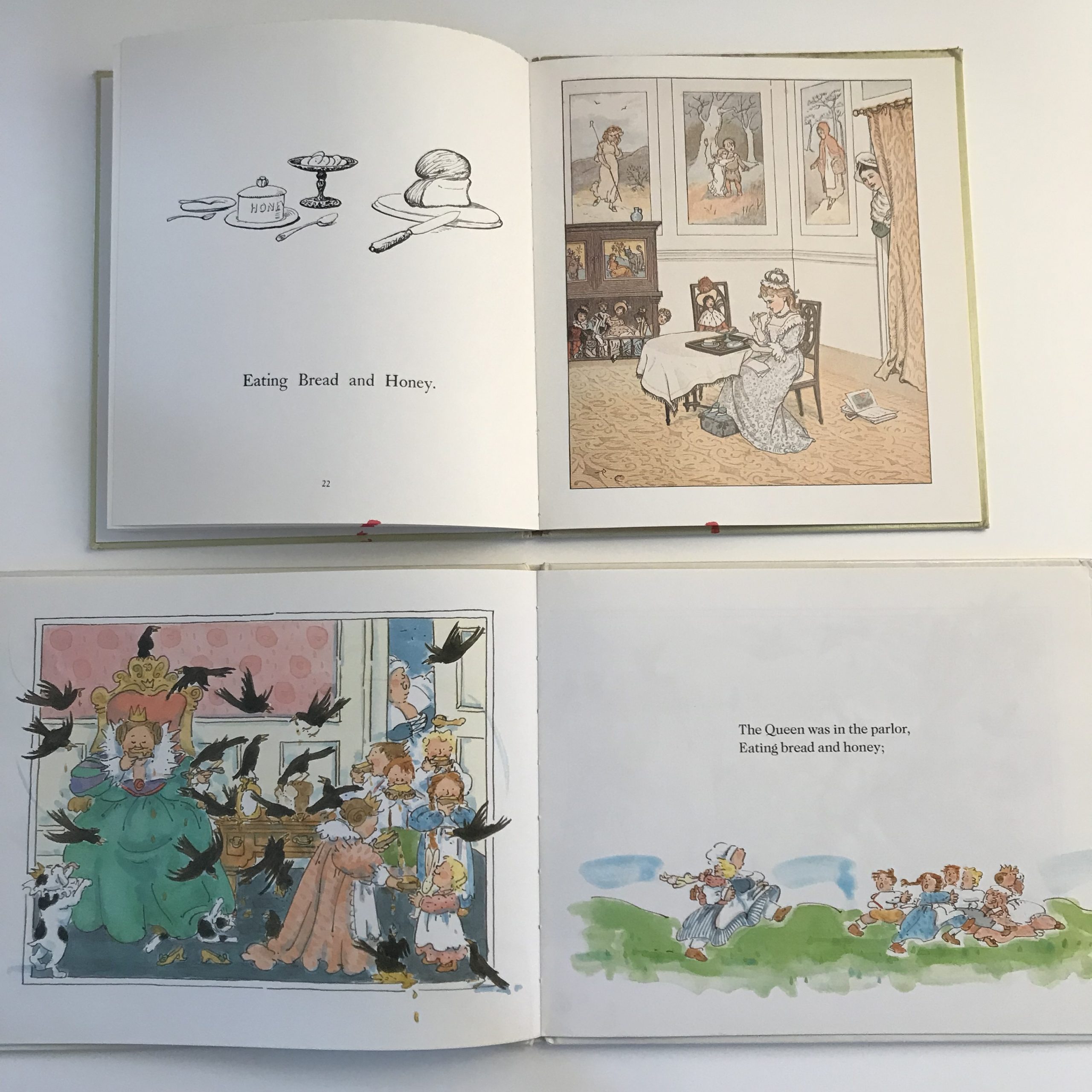 The Queen shares her bread and honey with the kids and the blackbirds.

She was modeled after my grandmother who had a sweet tooth. I remember her giant sugar cookies.

The cook is still in pursuit of the children. 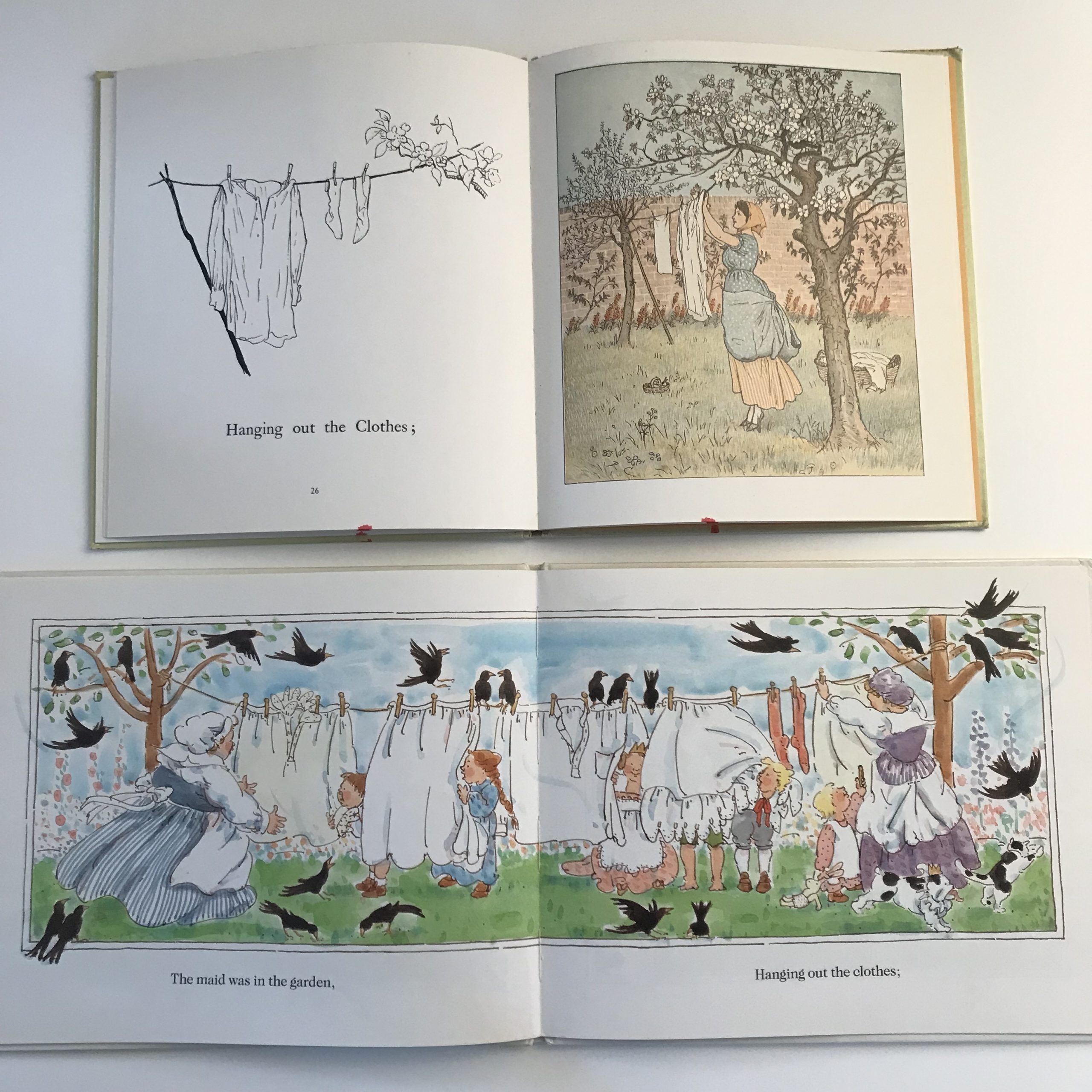 This spread was inspired by a childhood memory of wandering through fresh laundered sheets hanging on the clothes line. A fun place to hide. I loved the fresh smell!

(When I visited the Tower of London, I saw Henry VIII’s armor and discovered it was short and wide. Just like Henry! The clothes on the clothesline must fit the king and queen.) 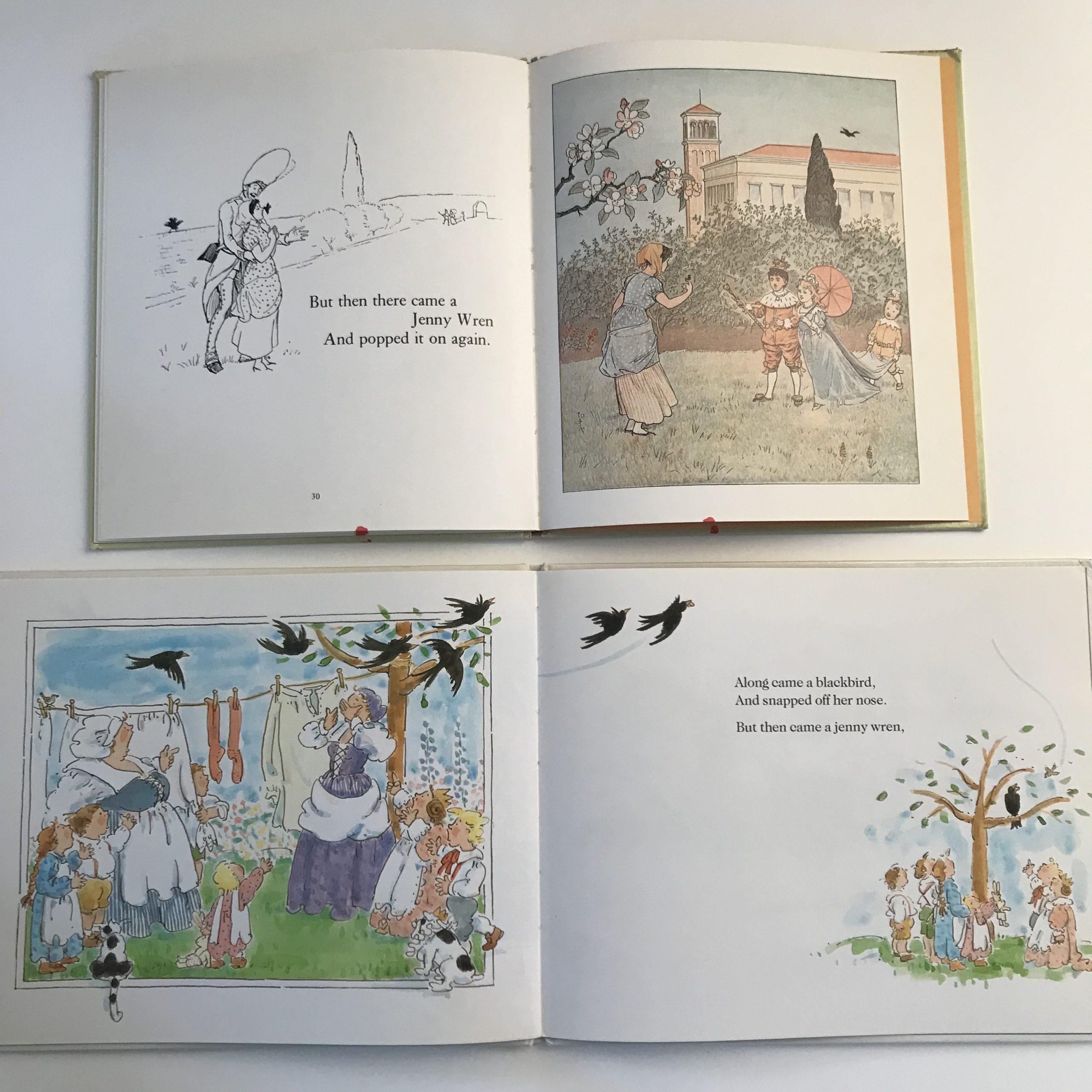 In some versions of this nursery rhyme, including Caldecott’s–after a blackbird snaps off the maid’s nose–a  jenny wren “pops” it on again. My tribute to Caldecott’s version had to have a jenny wren! I must be true to the words.

First, the blackbird needs to do his job.

Can you find which one has the nose?

(I love hearing kids squeal with delight when the find it!) 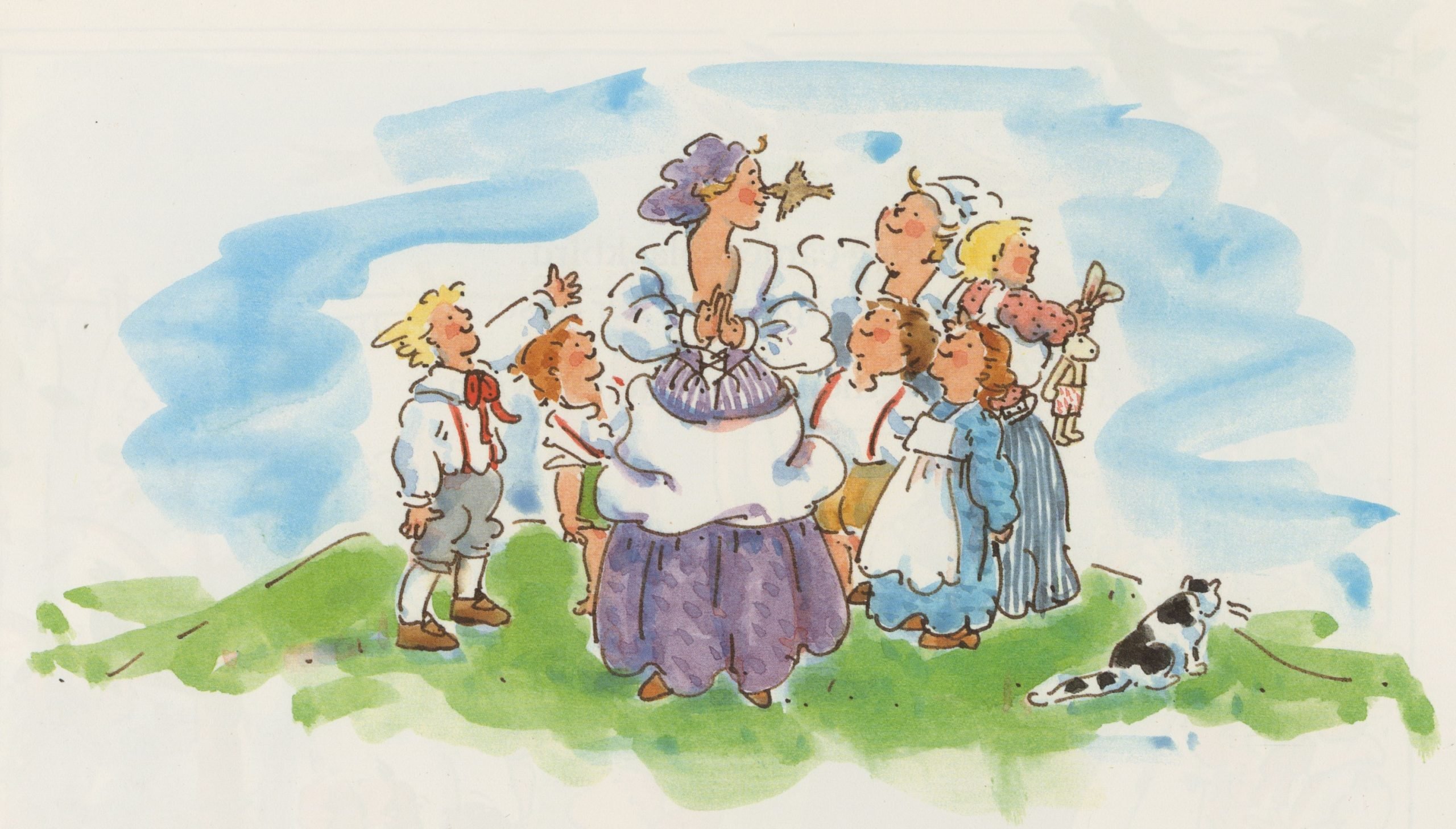 In a picture book, the pictures and text create a dance. Two different illustrators can take the same words and create a different dance and a different book.

One decision that an illustrator makes that has a huge impact on the story, is what the characters will look like. Will they be children or could they be rabbits? Bears?…

Sometimes the illustrator creates and introduces new characters that aren’t even in the written text! They still need to work with the story. She still needs to be true to the words. (I better have all 24 blackbirds!) But, these other characters can add an extra layer to the story. I introduced the courtyard kids, the queen’s dog (a bulldog), the cat that’s after the blackbirds, the cook and the princess. You won’t find any of these characters in the written poem. 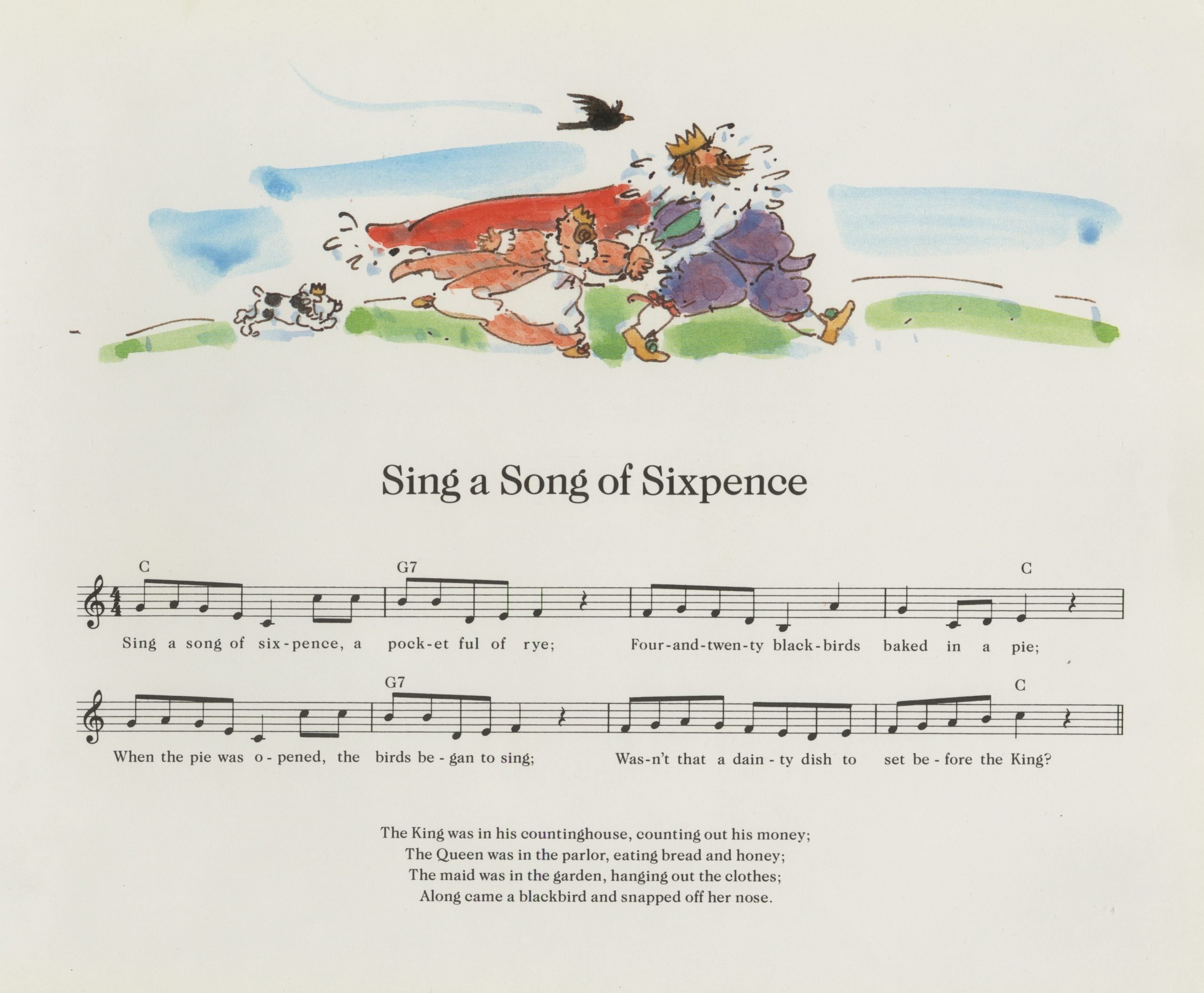 As for my princess…Another tribute to Caldecott who often added a twist at the end.

Caldecott ends his Hey Diddle Diddle with the knife and fork taking the spoon away and leaving the poor dish is shattered. 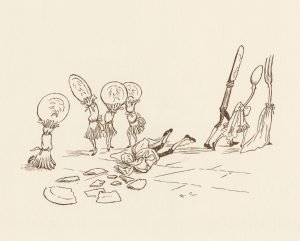 The goal is always to create a book that a child will want again and again and hopefully discover something new in the art each time she reads it.

If you want to make a picture book, starting with a poem in public domain a is a great place to begin.

What do you do after you pick out a poem? How do you turn those words into a 32 page book? I’ll talk more about about the process in a future post. Until then there are many helpful of resources on the internet.

Here are two of my favorites: 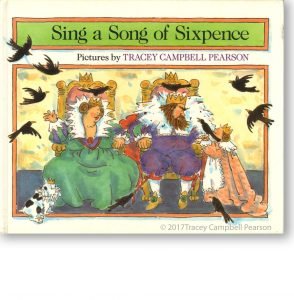 For fun activities and information about all of my books…visit my website: